What is a ruined orgasm? And, how to ruin your orgasm!

There’s an old adage that says, “There’s no such thing as a bad orgasm or a bad pizza.” As someone who used to date a girl who absolutely loved Domino’s, I can assure you that the latter part of that is simply not true.

As far as the bad orgasm part of the equation, you might be surprised on that account too. Fact of the matter is there’s an entire kink fetish that adores the idea of what is commonly called a ruined orgasm.

What is a ruined orgasm?

If you find yourself confused by the concept of ruined orgasms, especially ruined male orgasms, don’t worry, you’re not alone.

Now, at first glance, that may sound suspiciously like our old friend edging.

Waterproof and easy to clean, thank goodness, because you’ll need it! 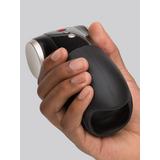 Ruined orgasms lean heavily into dominance/submission play. The person who is the sub in this situation is under the control of their dom partner.

That sub is usually male, but not exclusively, and for both them and the dom, control is ultimately the most important part.

The sub is denied the climactic “10 out of 10” pleasure of a great orgasm, and instead given a “2 out of 10,” or what some in the community call an “ejaculation-only” orgasm.

Many practitioners of ruined orgasm play will add in verbal humiliation directed at the sub, as well as fully verbalizing the torture of denying them that final release.

Just from the name alone, you can get the general idea, but mainly what forced orgasm has to do with is maximizing the sub’s pleasure and essentially imposing an orgasm on their body.

Speaking of control, you and your partner can add a new level of torture/teasing to your ruined orgasm play with this Fun Factory Manta Rechargeable Blue Vibrating Male Stroker. She (or you) can tease you into oblivion with this amazing device’s six speeds and six patterns of stroking sensations up and down your cock.

And if your lady gets too turned on from teasing you, you can use the Manta between the two of you to add a whole new level of sensation to your fucking!

And that’s another key distinction between ruined orgasm play and edging: the first is about control and power over another, the second is about maximizing pleasure before an awesome final release.

Of course, it gets complicated when we start talking about how the sub may get pleasure from not getting pleasure, i.e. receiving a ruined orgasm, but that’s a topic for a longer article…

How to ruin an orgasm

Get your mother-in-law on Zoom at the critical moment! Ha ha!

Thank you, I’ll be headlining here at The Funny Bone all week…

In all seriousness, there is a protocol, for lack of a better word for getting into trying out some ruined orgasm techniques.

As we always say here at Blitz’d, sex-positive means you’ve got to make communication your number one priority. If you’re going to try out some new type of sex play, you’ve got to discuss it before launching right into it.

That’s especially crucial when you’re talking about something that’s at least BDSM-adjacent like ruined orgasms.

Whichever end of the process you’re on – as we’ve noted, there is such a thing as ruined female orgasm too – you need to talk about dom/sub roles, what each of you expect, and what you hope to get out of it.

Have a safe word

When you define “ruined orgasm” as the type of play you’re going to try, you’re still talking about a form of torture. It can be delicious if you’re all-in, but it can also be excruciating – and of course, that’s kind of the point.

By definition, that kind of play can lead to some uncomfortable feelings that might get intense enough that you or she need to shut them down at some point.

Fun sex play is about consent, and you should never feel awkward making sure you’ve got a safe word to bail out, if either of you don’t feel like consenting anymore.

Yes, research is partly what you’re doing right now as you read about how to ruin your orgasm (or hers).

But before you get started applying this in practice, you should also take some time to delve deeper into what it really means to be a dom or a sub, both in a general sense of the terms, and also in the context of ruined orgasms.

There are very specific language cues, and do’s and don’ts that people who have practiced these kinds of more niche fetishes can better explain in more in-depth articles. A full understanding is important to how much fun you get out of it.

In other words, think of this article as an intro, 101-level class, but do consult with a graduate-level text before trying this out in the sheets.

Another research idea is to check out some ruined orgasm videos with your partner. They can give you some ideas for how to play each of your roles, not only in terms of what to say, but also the general character each of you will adopt.

Another reason to do some vid research together is that this can give each of you permission to more fully step into your respective roles once you decide to get started.

This is a way to allow yourself to get more into it, as you can psychologically separate who you really are individually and as a couple from the role you play during this particular sexy fun-time activity.

This dual-motor device has five speeds and a velvety-smooth interior that will seriously make you pop in seconds with a little water-based lube – but only when you have permission! 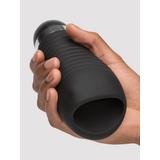 The goal here is to tease you and “enjoy” the road on which you’re traveling to a ruined orgasm, not the orgasm itself.

It’s also about her dominating you, and taking control of you, so explore those feelings as well, both of you.

How to ruin an orgasm – and enjoy it

Role play in all of its forms is just plain fun for those who are willing to explore and push the boundaries of their comfort zones.

As dudes we’re generally a pretty orgasm-centric bunch, often thinking of sex as a means to an end, and not a fun journey all on its own.

Having some ruined orgasm fun with a willing partner is a great way to push away those mental constraints and come out the other end (or not) a more fully sex-actualized person!

Just so you know… This article contains affiliate links. The commission we earn helps to cover our costs, and comes at no additional cost to you. For more information on our affiliate program, please refer to our disclosure policy.

The dad fad is over: What is dad bod and how to lose it