If you’ve ever watched the HBO series ‘The Boys’ – [SPOILERS AHEAD] and you absolutely should, if you’d like a dark-humored take on fucked-up, celebrity superheroes as envisioned by Garth Ennis – you may recall a certain scene that involved an adult superhero drinking breast milk.

The slurping ‘supe’ in question is quite clearly a deranged psychopath hiding behind a nice smile and carefully-curated public persona.

Despite the show’s quality and popularity, it’s unfortunate that its creators chose this particular framing to depict adult breastfeeding: a vanilla, judgmental sense of generalized ‘Ewww.’

In just the U.S. there are hundreds of other sites, each with hundreds of groups dedicated to the practice.

So, somebody’s into it – why? What do they get out of it?

It may seem at first glance to be the sort of a taboo that should automatically – and perhaps rightly – stir up uncomfortable feelings in people.

Let’s face it, nipple pleasure often gets overlooked. Let her know you care about her nips as much as the rest of her by getting her these amazing Lovehoney Perfect Pair Silicone Nipple Suckers. Their velvety soft touch are great for first time nipple play, clamping gently to the nipple to provide hands-free suction that’ll have her little soldiers saluting!

Lovehoney Perfect Pair Silicone Nipple Suckers
Did you know that for many people, nipple play is vital for reaching ‘the big O’? When stimulated, these little love buttons tell your brain to produce oxytocin: a crucial hormone required for climax.
Buy on Love Honey

The ancient Romans tell the story ‘Caritus Romanus,’ in which a woman named Pero covertly allows her own father to suckle at her breasts in order to save him from his prison sentence of death by starvation.

And in ‘Grapes of Wrath,’ John Steinbeck’s classic tale of the harsh realities of the American Dust Bowl during the Great Depression, the story ends with a young woman in a homeless encampment who has just lost her newborn child saving a starving man’s life by allowing him to suckle.

Breastfeeding Fetish: Why would a grown man want to breastfeed?

Despite an initial sense of cringe many otherwise open-minded people might feel when they hear the term ‘breastfeeding fetish,’ this particular kink is no weirder than any other.

Intimacy is the most common benefit breastfeeding adults reference when asked about the practice. Indeed, for some, sex isn’t even a part of it.

When you consider that for women who are nursing, their body releases the hormone oxytocin, also known as the pleasure hormone or the love hormone, feelings of profound warmth and intimacy toward an adult breastfeeding partner makes sense.

Yes, oxytocin is associated with arousal and orgasm, but it’s also responsible for creating or reinforcing feelings of bonding and pleasure of a platonic sort.

Breastfeeding is famously known to be a primary way that a mother passes her immunity to her child.

In fact, much like the aforementioned literary examples of starving men suckling in order to get nutrients.

In China even today there are areas where the practice of women breastfeeding adults who are sickly or recovering from an illness is common.

Hey guess where breast milk comes from? You guessed it – boobs. And women who are breastfeeding notoriously gain significant boobage while they’re at it.

Granted, this might not be the top most diplomatic angle to take when suggesting to your partner that you might like to try engaging in a lactation fetish, but nonetheless it’s a solid side benefit.

Hey, if suckling on her breasts regularly gets her to the point where a stiff breeze rustling her breasts can put her over the edge, why not give it a try?

To help ease into hot lactation play, you might try out these awesome Lovehoney Tease Me Adjustable Nipple Clamps. They are a good beginner-level nipple clamp, fully adjustable with a sliding tweezer design that can give you anywhere from a minor tweak right up to lip-biting excruciating intensity. Silicon rubber tips offer hypoallergenic, safe play. 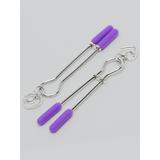 How do adults induce lactation while breastfeeding?

So, you’ve talked with your partner, and you’ve decided that while you’re down to try adult breastfeeding.

So, what to do to prime the pump, so to speak?

Funny you should use that word: breast pumps cause the body to produce the hormone prolactin, which in turn prompts milk production.

According to lactation.wiki – the research I do for you people, sheesh – a woman should begin pumping 3 times a day for about 5 minutes at a time, then slowly build up the frequency and duration until she’s eventually pumping every 2 -3 hours for 15 -20 minutes.

There is a certain class of drugs that stimulate the production of prolactin, called by the amazing and otherworldly name ‘galactogogues.’ Meds like domperidone that promote lactation can be ordered online without a prescription, for instance.

Also, be aware that drugs containing pseudoephedrine (Sudafed, Zyrtec and the like) as well as some hormonal birth control meds can interfere with the production of breast milk.

But there are plenty of foods that act as natural galactogogues, including eggs, oats, brown rice, almonds, and salmon. Another important diet point is to stay hydrated.

Once the groundwork has been laid, it’s time you got laid as well! To get your lady’s breast milk flowing, try laying a warm, damp towel on her breasts to signal to her body that it’s time.

Also, stimulating her nipples by lightly stroking them – remember, that shit’s sensitive right now – can help to induce the flow and stimulate the milk-ejection reflex.

Is it healthy for adults to drink breast milk?

As mentioned above, there is undeniable nutritional value in breast milk. While most healthy adults should already be getting all the nutrients contained in breast milk, and thus may not gain any extra benefits, it certainly can’t hurt to slurp down all those delicious vitamins and minerals.

But for the sake of fully understanding some of the wilder claims you’re bound to encounter as you delve into the world of adult breast suckling, be aware that in 2015, a Royal Society of Medicine study found that the health benefits for adults breastfeeding:

“…do not stand up clinically,” and that “…no scientific study evidences that direct adult consumption of human milk for medicinal properties offers anything more than a placebo effect.”  (Man, those guys are no fun…)

Having said that, and remembering that for the most part there’s no danger in consuming breast milk, there are a few dangers to watch out for as you pursue the pleasures of adult breastfeeding sex.

If you’re ready to graduate on to the advanced nipple and lactation play, check out these Hi-Beam Vibrating Nipple Pumps. These dynamic nipple pumps will give her a tingle in her dingles and have those nips standing at full attention with the vibrating suction action. An easy-squeeze bulb with a quick-release valve gives you full control over the development of events and a rapid exit if it gets too intense – which it just might! 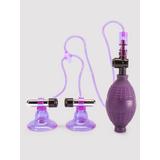 Hi-Beam Vibrating Nipple Pumps
Bigger, harder and more sensitive nipples are just the flick of a switch away with this vibrating nipple pump. Sucking onto each nip, it creates a mini vacuum that pulls even the shyest nipple to attention, increasing sensitivity to touch.
Buy on Love Honey

Indeed, for women who are already lactating, having a partner who helps stimulate the flow of her breast milk can save her from having to take drugs unnecessarily while simultaneously building a much closer bond.

That closeness is not only physical, it’s also a function of the additional time a set of partners must spend together, since she’ll need to stimulate her milk expression several times per day.

And yeah, it’s a taboo. Undeniably, there are maternal undertones and a subversion of the mother/child relationship embedded within the pursuit of adult breastfeeding sex relationship.

But subversion of norms is what kink is all about. And as bold explorers of the land within our minds and bodies, taking a trip down a milky side path shouldn’t be any more strange or repulsive than any other sexual diversion we might want to pursue.

Speaking of, maybe enjoy with some Chips Ahoy cookies?

You must not rely on the information provided on our website as an alternative to medical advice from your doctor or other professional healthcare professional. For more information read our full disclaimer here.

Now read these:
—Your guide to the world of spanking
—Introducing the weird wedgie fetish
—The dental and teeth fetish explained
—Pissing all over me; the urine fetish
—Gazing into the belly button fetish
—Enter the world of kinky smoking
—Chewing over the spitting kink