Big dick problems: What to do when your dick is TOO big

Why having a large penis might not always be a good thing.

We don’t often hear guys complaining about big dick problems, but it can be a real issue. So, if you’re concerned that your dick is too big for her, read on, and let’s put your mind to rest…

It’s just us here, guys, so we can talk, right? Let’s be honest. All of us are on some level obsessed with our tackle. We have been since we were little kids and we discovered all the funny things they could do.

And of course, after puberty hit, that obsession took on a much more profound tone when we discovered what they could REALLY do.

But if you’re like most guys, the main question you have always, always had about your willy is – say it with me boys:

Is it big enough?

For millions of insecure men, the answer will always be ‘No.’ Bigger is always going to seem better to them.

Just look at the billion-dollar global industry that has sprung up around products and services that allegedly give you a bigger dick.

There are all kinds of dubious pills, creams, lotions, pumps, stretching devices, and fucking WEIGHTS that you attach to your dick to make it bigger (fuck off with that, by the way) – and that’s not to even mention surgery.

You can definitely fuck off with that.

But is a large penis really always better?

We hear a lot these days about ‘guys with small dicks,’ but what about guys with big dick problems? Is hauling around a slab of sausage big enough that you could club a baby seal to death with it really a good thing?

What kind of complications does having an actual big dick bring?

What problems do women have with guys whose dick is too big?

And, if you do have a large penis, what are some ways to avoid those problems?

Does this mean that big dick energy isn’t a thing anymore?

However, there are also some downsides. Like, besides the whole end of civilization thing.

The average penis size for adult men erect is 5.2 inches in length, and 4.6 inches in circumference.

In fact, if you have a penis that is 8 inches or over, that puts you in the top 2 percent of penis size for guys worldwide. Congrats, you have a large penis.

But is your dick too big for her?

And even knowing this, even being aware intellectually of the fallacy of phalluses, even understanding that it’s delusional to think that anything under 8 inches is just a pathetically small pecker, many guys still long for a bigger dong.

What they don’t realize is that magnum-sized hogs bring with them magnum-sized big dick problems – and often those problems manifest themselves in the bedroom, believe it or not.

But where most people see problems, we here at Blitz’d are all about solutions. Starting with this amazing slip’n’slide lube from ID Millennium.

This silicone-based concoction will have you asking how you ever got along without it, as its waterproof formula will keep her juicy as long as it takes! 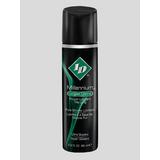 ID Millennium Silicone Lubricant
A little lube (and love) goes a very long way with this super-concentrated silicone formula from ID Millennium. A must-have for all lube and intimate pleasure fans, it’s even waterproof for frisky hot tub sessions.
Buy on Love Honey

Come on now, I hear you saying.

What possible issue could a woman have with being with a guy with a big penis? Is there really such a thing as a dick too big for her? Don’t they want that?

You might be surprised to hear how many women who have actually experienced being with a dude whose manhood was too big for her, and that it just wasn’t that much fun at all.

For some it was painful – and for some even dangerous.

You can find numerous stories of ruptured ovarian cysts, tearing off the vaginal wall, a bruised or displaced cervix – big dick energy like that can often mean big problems in the boudoir.

Here’s a partial list of some of the big dick problems reported:

Even when extra-large penis guys are using extra large condoms, they still often break or slip off during sex. What’s more, larger guys often report that they just don’t fit well and are uncomfortable (for real, not the lie your university roommate told girls in order to get them to let him go raw dog.)

Yes, some women may crave the novelty of banging a dude with a huge schlong, but they often say that it hurts like hell. There’s not only the possibility of vaginal tearing or soreness; even if you avoid that, there can be discomfort to the point where it kills the mood.

Nothing like having to stop over and over and say, ‘Are you all right?’ to ruin an evening of fun.

Sucks when you can’t get it in

Guys, can you imagine anything more frustrating than only being able to get like half of your penis inside her? Or less? Sure, that part still feels good, but come on! Who doesn’t want to go balls deep up in there?

For lots of XXL dudes this is just a fact of life when it comes to penetrative sex: they have never and may never achieve full penetration all the way to the hilt with many partners.

Sucks for her too

In case you didn’t know it, women have these things called clitorises. And when you rub them, they feel good. So when you’re having sex with a girl on top, you might notice her grinding against you with your schlong all the way in just as damn far as it can go?

For a lot of women, that’s the only way they get off during penetrative sex without actually rubbing their clit manually. If you’re a guy packing an anaconda-sized large penis, that ain’t gonna happen for her, and that can mean that, for her, sex with a big-dicked guy is actually less satisfying than with an average-sized dude.

And you know what, champ, if she’s not feeling it this time, it’s okay to have sex that doesn’t end in penetration every time. Meanwhile, y’all going to need to reach the finish line somehow. You know how to take care of her clit, but maybe give her some of this Stroke 29 lube to use on your monster hog.

The manufacturers claim that the product’s heat and friction change at the 29th stroke, so give her a challenge! 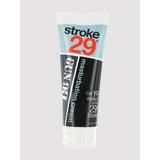 Okay, but what can I do if I have a jumbo-sized crank?

Well, sufferer of big dick problems, all is not lost, even if you are packing a stallion-sized salami.

There are some ways you can ease things in the bedroom for her and you both, based on testimonials from women who have been on the receiving end of men who wield mighty meatsticks:

Here’s a no-brainer. If you’re bigger than average, you’re likely going to have to take your time getting all up in them guts, boyo. Male impatience even among those with average-sized penises has ruined the mood in many a bedroom encounter, and that goes double for large penis guys.

Lube is your friend

This goes hand in hand with taking it slower when you’re packing, but you also have to make damn sure she’s good to go before you start trying to enter the holy of holies with a large penis. And look, she may very well be really into it and just not that lubricated sometimes.

There’s no shame in using some good water-based lube to get things extra slippery down there if you’re on the larger side.

You can avoid a lot of big dick problems simply be letting her take more control of the festivities. Trying different positions, let her dictate pace and how deep you go – all of this will go a long way toward ensuring that she gets a good experience out of it.

Have fun in other ways

Of course, there are a ton of things you can do sexually, as we know. It’s easy to get caught up in penetration being the end-all be-all of sex, but think in terms of making it just one part of your sexy fun and it’ll take a lot of the pressure off.

What is a large penis anyway?

Does this mean it’s over for BDE?

Guys, the notion of big dick energy has been around for a very long time – and the dirty little secret is that it’s all about confidence, not actual penis size.

As we’ve already seen, only 2 percent of men have a penis larger than 8 inches; there’s a whole lot more than that amount of confident dudes out there swinging BDE, wouldn’t you say?

Confidence – aka big dick energy – stems from being comfortable in your body and who you are, and secure in the knowledge that you know what you’re about.

Work out, get yourself in shape, focus on the positive, focus on what you do well. Flash that killer smile everywhere you go and make ‘em laugh and you too will be said to have big dick energy.

Here at Blitz’d we are big believers in swinging big dick energy at all times. But you can be especially sure you’re keeping your pistol in tip-top shape if you oil it up properly with this Gun Oil Personal Lubricant.

Great for use with her or solo, this awesome slippery product contains Vitamin E and Aloe as well to keep your BDE flowing smooth and healthy! 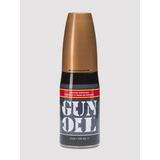 Gun Oil Personal Silicone Lubricant
The premium condom-safe personal lubricant that keeps a man’s most important weapon well oiled. If the military issued a lube, this is what they’d distribute with the condoms and artillery. Developed by marines for marines.
Buy on Love Honey

15 of the best water bottle brands to keep you hydrated

Next
Viagra for young men: What are the risks and rewards?