Whiskey dick: What is whiskey dick, and what can we do about it?

Ah, sex and alcohol. If you could count up all the fortunes that have been made and lost atop the sweaty, stinking, slippery sales of sex and alcohol throughout the ages, the amount of money involved would make Jeff Bezos look like a rough sleeper. We love to get our drink on, and even more we REALLY love to get our freak on.

But if there is a God out there, he (or she?) is a cruel trickster, because the combination of these two most wonderful of life’s pleasures can lead to the utter horror of what we call “whiskey dick.”

Imagine the scenario: you’re having a great night out, dancing, drinking, doing shots, and generally whooping it up with your mates. You meet a young lady who finds your natural charm, incredible sense of humor, and stunning good looks irresistible. Hey, we’ve all been there.

The two of you – or, hell, let’s make it the three of you, as your young lady now has an equally fetching friend who wants to join the party – you three head out to have some naked fun. Score!

Cut to: three hours later, the girls, having done each other up and down in delightfully unspeakable ways, are now snoring away in a tangle of sweetly sticky limbs. You, on the other hand, are still sitting on the edge of the bed drunkenly flogging away at your little soldier trying to get him to stand at attention as you weep tears of frustration.

You, sir, are suffering from the horrendous condition known as whiskey dick.

So what is whiskey dick anyway? And more importantly, how can you prevent it?

What is whiskey dick?

For as long as humans have imbibed alcohol, we’ve known that it loosens the inhibitions and makes us feel good. And the direction that good feeling often takes is an amorous one. The problem is that if you drink too much, it can sometimes affect your ability to get hard. Even Shakespeare wrote about whiskey dick, saying in Macbeth that alcohol “…provokes the desire, but takes away the performance.”

But what causes whiskey dick? In the moment, you may want to get it on, more than anything in the world. But when you’re too drunk, you find your mighty cucumber has turned into a shy little gherkin.

What’s up with that? I mean, he’s been your best friend since you were 13 or so – how dare your disco stick betray you now, right when you need him most!

Whiskey dick’s a thing, sure, but truly nothing screams ‘amateur’ like a guy who can’t hold back. With this Tracey Cox Edge Cream, you can give yourself that extra level of desensitization you need to make sure she’s impressed with what you can do for her – first. Mentholatum, St John’s wort and other ingredients work together to numb you just enough to hang in there!

The biology of whiskey dick

Unfortunately, alcohol has a direct effect on the penis because it affects blood flow, which can lead to whiskey dick. Booze is a vasodilator, meaning it causes your blood vessels to open up and your blood to flow more freely. That’s why people get flushed cheeks when they drink.

Hey, wait a minute! I thought the reason we get hard in the first place is because of blood flowing into the penis! Why is increased blood flow a bad thing if that’s true?

Well, your willy is a wonder, as you know, and it can be a tricky thing. The deal is, yes, it’s true that it takes blood flowing into your baloney pony to get an erection – but it also requires the blood to stay there for a while (at least for the 60 seconds you require to work your magic, champ). It would make sense that the increased overall blood flow in your body means it’s flowing out of your penis faster as well.

That may be one factor, and to tell the truth, there aren’t a lot of studies that directly correlate whiskey dick specifically to vasodilation. Some medical studies have even concluded that, while alcohol may increase blood flow elsewhere – like giving you those rosy cheeks – it may specifically prevent blood flow to your peen.

What we do know for sure is that alcohol is a central nervous system depressant. That’s why having a drink or three before a first date loosens you up and relaxes you. Unfortunately, that relaxing effect can affect the communication between your brain and your love truncheon, resulting in whiskey dick. To paraphrase Shakespeare, you may have your desire provoked, but your ability to perform is in the shitter.

Hey, if alcohol can affect your ability to walk, drive, slur your speech and cause you to drunk-dial your demonic harpy of an ex at 4:00 a.m., it only makes sense that it would affect your trouser monkey as well.

Okay, so how to avoid whiskey dick?

Unfortunately, there’s no magic solution to avoiding whiskey dick – other than limiting your alcohol intake. If you really feel the need to have that boost of liquid courage to add extra charm to your game, just remember to keep it to a minimum. The trick is to find a balance between lubricating your mastery of the verbal skills of charming the pants off of young ladies, and giving your custard launcher the best chance to stand proud once you’ve closed the deal.

Another way you can help prevent whiskey dick is to keep in mind that other drugs and medications can contribute to making your donger docile when it’s game time. Cocaine, methamphetamines, antidepressants, antihistamines, blood pressure meds and more can cause problems. Especially when taken in combination with alcohol, certain meds increase the chances your kielbasa will be reduced to a flaccid Vienna sausage at the moment of truth.

One whiskey dick secret is there are over-the-counter creams like Doc Johnson’s Sta-Erect cream that can give you that extra edge of diamond-cutter hardness. Apply this benzocaine-based formula to your cock 10 minutes before sex to achieve that extra confidence and firmness you need. 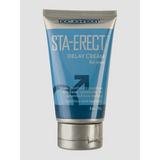 Doc Johnson Sta-Erect Delay Cream
Stay the course with confidence with the help of this specially formulated delay cream. Rub in a small amount of Sta-Erect along the length of your penis 10 minutes before sex for enhanced performance and prolonged sexual pleasure.
Buy on Love Honey

Here are a few FAQs on whiskey dick:

Does whiskey dick only happen with whiskey?

No, sorry, switching to vodka ain’t gonna help. The culprit here is alcohol in all its forms, so the beverage in which you drink it doesn’t really matter. However, one tip to keep in mind is that while beer and wine do contain alcohol, they contain a lot less than straight liquor. You can increase your chances of wielding your mighty meatstick like a boss if you nurse a lower alcohol drink until it’s time to do the deed rather than putting away shot after shot.

How many drinks does it take to cause whiskey dick?

It depends on a ton of factors: your body weight, body composition, how many drinks you’ve already had, meds you may be on, whether you’ve eaten, how hydrated you are, and how fast you drank. Suffice to say everyone is different – much like the mighty male member – and you’ll just have to learn how to pace yourself correctly.

Is there a female equivalent to whiskey dick?

Yep. There is a condition that occurs to many women when they’ve imbibed too much that’s commonly called “whiskey clit.” While women don’t have to worry about getting hard per se when it comes to sex, arousal works much the same for them as for men, and alcohol can severely affect blood flow to the clitoris. A clit softie is a lot harder to detect than a limp noodle, but whiskey clit can also affect how lubricated a woman gets during sex and severely reduce how much pleasure she gets out of it.

How can you fix whiskey dick once you’re already there?

Sadly boys, the only cure for whiskey dick is sobering up. That being said, however, there are a number of strategies you can employ to avoid the worst embarrassment for you and your date.

If whiskey dick happens is it something I need to worry about?

If you’re a young guy and you normally have no trouble getting hard, then the occasional bout with whiskey dick when you’re shlammered out of your gourd is not unusual. If, however, you have trouble getting erect when you’re sober, or when you’ve only had a small amount to drink, you should consider talking to your doctor. It could be a sign of some other medical condition that prevents you from enjoying sex to the fullest.

So don’t panic if whiskey dick happens once. Certainly you don’t want to get in your head about it, as there are powerful psychological aspects to sexuality that can complicate things even more. Do remember though that over the long term, heavy drinking can affect your sexual performance and ability to get hard and stay hard. Studies show that long-term heavy drinking can affect your hormones,  and with lowered testosterone comes higher levels of estrogen, potentially reducing your sex drive.

The bottom line is that, just as we’ve done for millennia, humans will continue to mix alcohol and sex, simply because they feel so good, and in some ways are complementary. Just keep in mind that your body has limits as to what it can do for you – and your partner – if you fill it full of toxins, so go easy if you want to get laid, and make sure your love muscle is fully pumped up at the right moment!

If you find yourself ready to pop too quickly when you’re getting down, try Sliquid Ride BodyWorx Rock Delay cream. This amazing, easy-to-apply spray really works to give you that boost of staying power you need. Impress that girl you’ve been trying to bag for so long: don’t leave her sticky and disappointed while cleaning up your premature load! 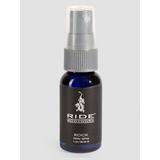 Sliquid Ride BodyWorx Rock Delay Spray
Sliquid Ride Rock helps you last longer between the sheets and improve your sexual performance. A high-strength delay spray made from natural ingredients, spritz a little onto your penis before sex to aid your erection potential.
Buy on Love Honey

Stay tuned for more health and fitness advice from Blitz’d!

15 of the best water bottle brands to keep you hydrated

Previous
Can’t hold on? How to last longer during sex

Next
What is premature ejaculation? How soon is too soon?

Fun in the sun: The 10 best sex resorts to explore